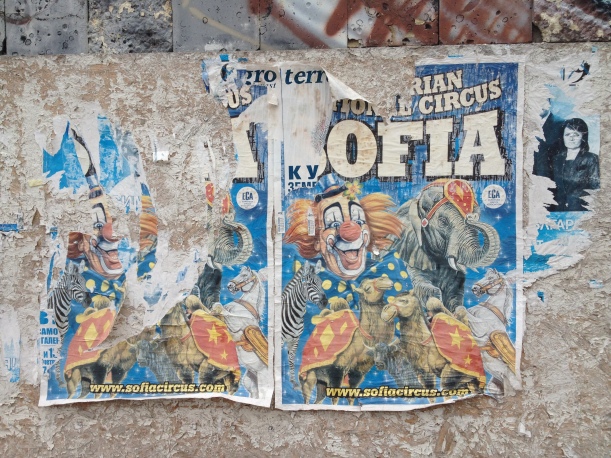 These were part of a huge line of peeling and faded circus posters along a heavily graffiti covered stone wall outside a large four storey secondary school, currently out of use as it is undergoing repairs and renovation. Just before Christmas, the new roof that was being put on the school caught fire, cause unknown, and all the new work done was lost, and further damage created by the fire itself.
The tatty circus posters, the burnt and broken school, the children separated and shifted away to be educated in other schools…. the themes all seems to come together with this image.

Digger jokingly quotes in rhyming couplets (and being Bulgarian himself of course) “‘These Bulgarians, are barbarians”
Great image below of a very smart Baba in a puffer jacket acting that out.
How much are the protests using the EU as a scapegoat to offload general anger and frustration at the government here is another question.

Image taken from the link above.

All the way on the long road to Bulgaria, Digger has been creating a mental list of things he doesn’t like about his country of birth. In a mode of negativity he details them as we approach the Greece-Bulgaria border. 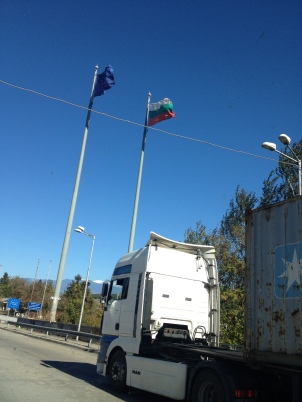 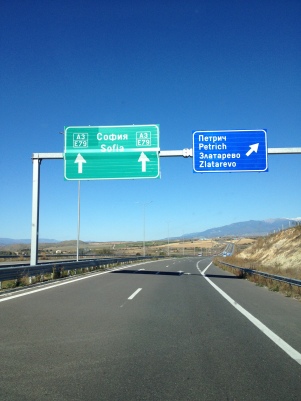 My visits to Bulgaria previously have been always in the sultry hot summer months, where we stay in a little village with his parents, Diado (grandfather) and Baba (Granny). Their house and garden is a well-ordered model of self-sufficiency, with beautiful purple and white flowers adorning the pathways, and succulent red grapes hanging down above the swinging chair.
Although fully agreeing that Digger has a far greater knowledge, and perhaps allowance, to point out the faults, I do suggest he stops being so pessimistic. “Harrumph” he says “Bulgaria is a country with a glass less than half full”.
We follow a bus for a little while, and he laughs, ” That bus knows what I am talking about”. 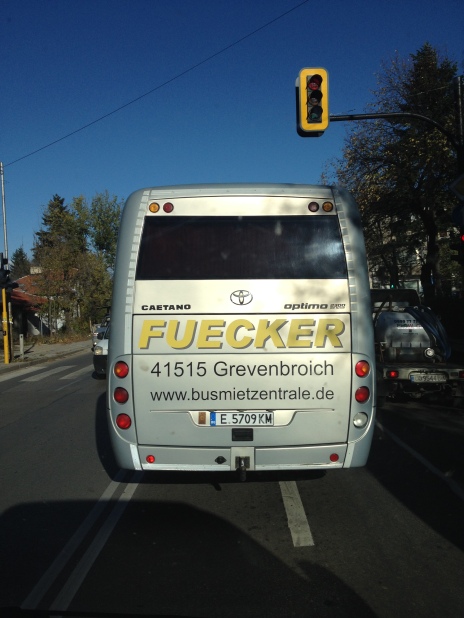 He says,
“One. The roads will be rubbish. It will take us far longer to get anywhere than it looks on the map.
Two. The police will stop us. They’ll spot the UK plates, and pull us over, and want to see all our paperwork and try and get a bribe out of us. They’ll think we are stupid foreigners that can be tricked into paying something”. He continues,
“Three. Did you know that Bulgaria has the worst air pollution in all of Europe? I read a report on it. People can’t afford to pay the electricity prices so everyone burns wood and coal. Everything is filthy dirty.
Four. Litter! People don’t care”, he shakes his head “there will be crap everywhere. And street dogs.
Five. You’ll spot the prostitutes out at the sides of the roads. In the lay-bys.
Six. And the gypsies will be going through the bins to see what they can find to recycle and sell on. Or steal from the empty houses”
He takes a break in his monologue of disaster to hand our passport over at the border. A long conversation through the window of the van follows.
“See?” he shakes his head sadly as we are finally waved through, “They think it is wrong we are all travelling on different forms of ID’s. They want to know why Tiddler has my surname but doesn’t have a Bulgarian passport. They are stuck in the past, stuck in the red tape legacy of communism. Nobody wants to be here, and do these jobs, and get no money for it. Don’t expect any sort of customer service”.
“Why are you being so grumpy?” I ask. “I thought you wanted us all to come to Bulgaria?”
“I came because I thought you wanted us all to come to Bulgaria?”
And with that slightly ominous note of a possible mis-communication of our grand plan, we cross the border. 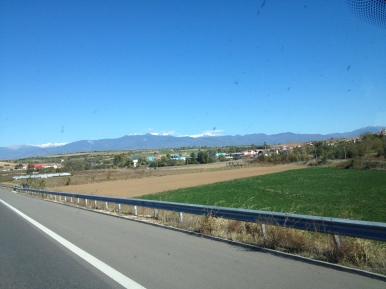 We travel through to the capital city Sofia, passing into the shadow of the massive Vitosha mountains that prevents the warm Mediterranean air travelling northwards. The temperature drops immediately and there is frost on the ground. We spend a couple of days there with Digger’s aunt, uncle and cousin. 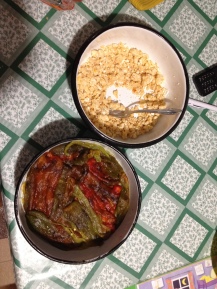 We get fed with rich banitsa and baklava, and buttery trout and stuffed roasted peppers, and the ubiquitous shopska salad, and Tiddler’s cheeks are pinched and her chin chucked. We drive on to Digger’s parents house, in the village of V_ L_ and get more banitsa, and hearty herb-laden bop (bean) soup, and Tiddler gets to dig out old toys that we left there the previous summer and talks ten to the dozen to Diado even though he does not understand a single word.

Baba is still on an extended visit abroad, helping Digger’s brother and family in Canada. The Bulgaria diaspora is far flung, and the families and the empty houses and the ghost villages left behind are falling into slow but steady disrepair. 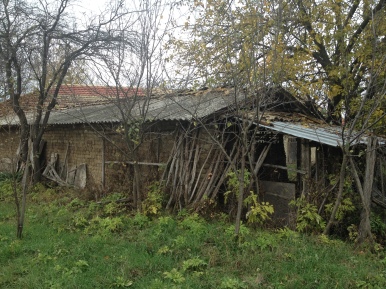 We decide to settle for the winter in a little empty apartment owned by Digger’s family (more detail in future blogs) in the nearby town of T_, as that way we have better access to services when the snows do come (ten weeks of metre high snow on the ground last winter) , and can visit the village without having to be exactly living under Diado’s roof. (This means however, he just ends up coming into town to see us every day, to instruct Digger on the best way of doing things, if it was him).
We take a few days to find our feet and unpack Leo properly, and effectively we are now in our new ‘home’ for the time being. So in these early days of Digger’s gloomy predictions, was he really being unfair to his homeland? No, not all. The roads broke Leo’s hydraulic suspension within three days, we got stopped by traffic police twice in one day (and they refused to accept that his island driving licence was real and valid for driving in Europe), and all his other points proved to be true too. In future days (and blogs) we see the problems and the ‘it-could-only-happen-in-Bulgaria’ solutions and the poverty and neglect that this beautiful country is suffering. But we find reasons to love it all the same.

"Do you what you have always done, and you will get what you've always got". With that in mind, these ponderings and wanderings are our mental and physical journey to make meaningful lifestyle changes, one penny at a time. In the real world there are no pots of gold at the end of the rainbow, (yes, tried that) so this is the blog of a series of decisions that will enable us try and live a life a little less ordinary. Stick with us (Thrifter, Digger and Tiddler) and share the process. We hope to provide a little bit of inspiration, a few thought provoking ideas, and a chilled out approach to going a little bit off grid.